The Unlikely Battle Between Sea Urchins And Kelp

Nature is a never-ending balancing act.

Wherever you look, every healthy habitat exists due to the contribution of several factors working together. The life within rainforests, deserts, mountains, oceans and everywhere in between rests on a fine line of codependency. So when an external force alters or removes one of these factors, one that a habitat depends upon, this balance can be all too easily lost.

Kelp In The Balance

For the past several years, kelp species in California have fought against an unlikely enemy. The purple sea urchin (strongylocentrotus purpuratus) is nothing you'd want to step on without shoes, but otherwise unassuming: each animal is relatively small, about the size of a fist, covered in dark, purple spines protruding an inch or so from it’s round body. 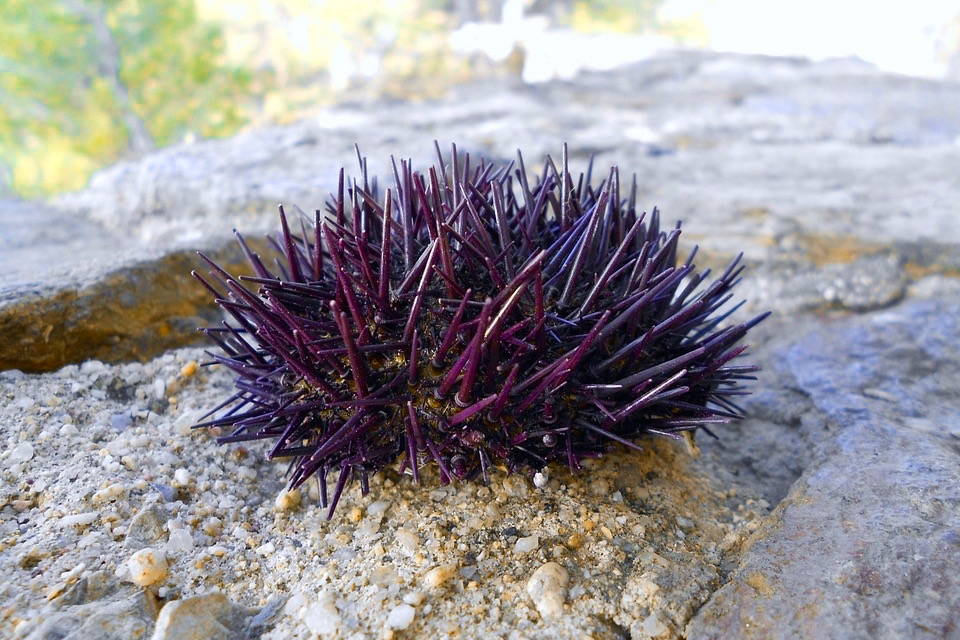 In a healthy ecosystem, the purple sea urchin is certainly no villain. When kelp is abundant and underwater forests are rich with nutrients and sea-life, urchins most often dwell in crevices, mainly eating loose bits of kelp that drift within their reach.

In fact the only reason these animals venture out of their favored hiding places is if food becomes scarce. Then the purple sea urchins, usually independent in nature, group together to search for food. They behave collectively, like a hive mind, spreading across the ocean floor and consuming any vegetation in their path.

If a kelp forest is unhealthy, this behavior can become a problem. Most species of kelp prefer cooler temperatures, and one of the reasons kelp has flourished in California is the cold, nutrient-rich waters on the ocean floor that are brought to the surface by currents. This process is called upwelling, and in ideal circumstances it allows kelp species (like Giant Kelp) to grow up to 3 feet in just one day!

But due to recent changes in current conditions and water temperatures, albeit minor, the upwelling of nutritious water has been essentially cut off, causing massive amounts of kelp to die-off off California's coastline.

When a kelp forest isn't doing well, some responsibility of the ecosystem's balance falls to the sea urchins’ predators, like starfish and sea otters, which keep the spiny creature’s population in check. But if there aren’t enough predators hunting and curbing the urchin's growth rate, kelp forests are at risk of being completely consumed.

So what happens when kelp growth is slow and urchins are left unchecked?

The result is the disappearance of the forest, replaced by an underwater desert, an ocean floor covered with urchins like a dark, spiny carpet. Scientists call the phenomenon an urchin barren, and it forms when an urchin population becomes incredibly dense and annihilates a kelp forest’s vegetation, leaving nothing but thick clusters of urchins on an otherwise mostly lifeless seafloor. 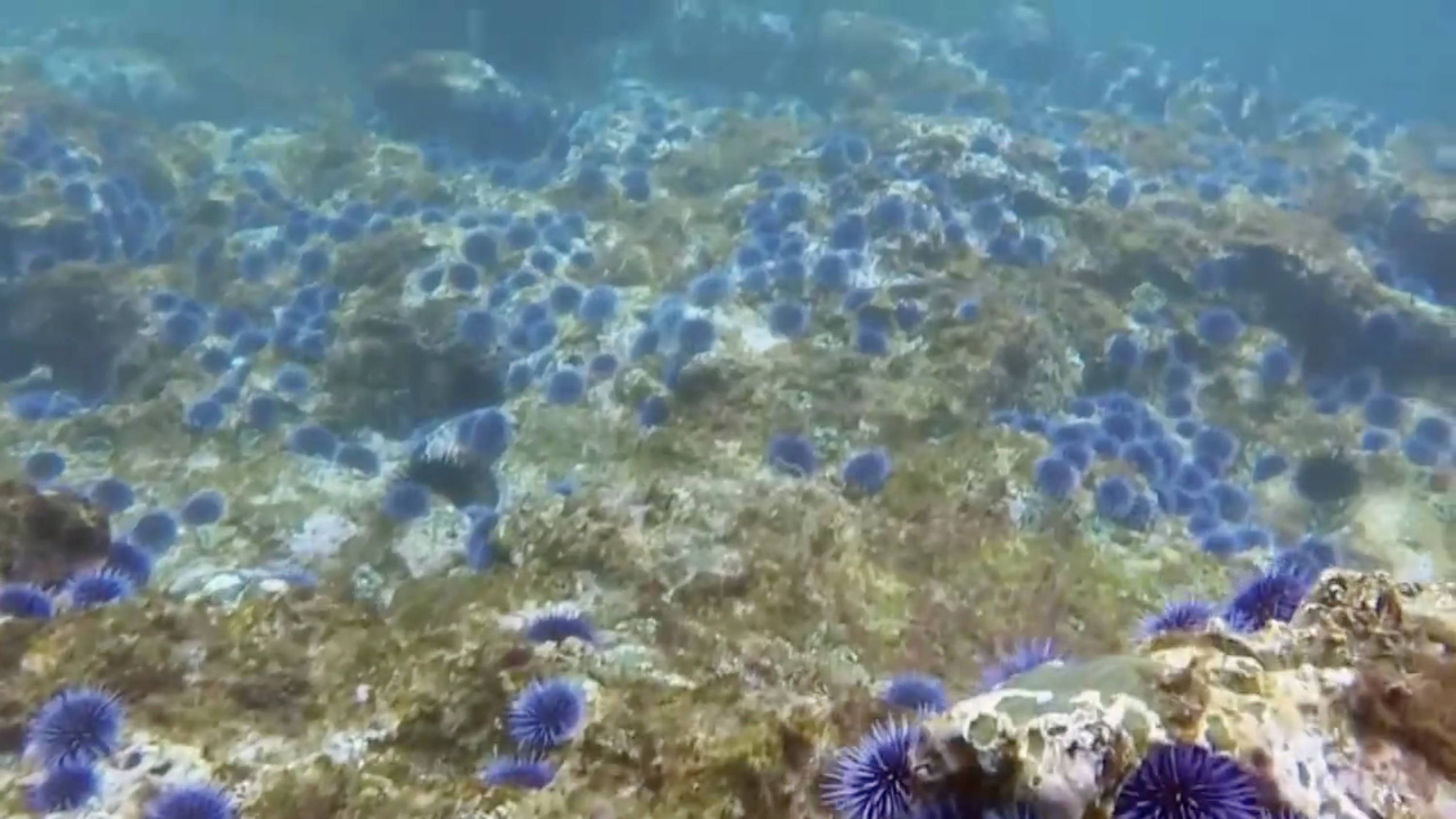 An urchin barren, devoid of kelp life. (Photo from CNET)

For better or worst, purple sea urchins are incredibly resilient animals, not unlike underwater cockroaches, able to survive long periods of time without food and nutrients. This makes it quite difficult to reverse the effects of an urchin barren: any kelp that begins to grow back is quickly eaten, and the barren itself acts as a barrier to further change. In the Aleutian Islands and areas off the coast of Japan, kelp forests have been replaced by urchin barrens where they’ve remained for decades without change.

Based on previously recorded instances where a kelp forest is overtaken by urchins, there is an external force that pushed the ecosystem out of balance that can be traced back to human interference. So if we are often the root of this problem, how can we help resolve it?

In a perfect world, the solution would be quite simple: in areas where the population is too dense, why don’t we just eat the urchins? Underneath their hard exterior body, sea urchins have a small but valuable bit of food: their gonads, a savory piece of bright orange meat well known by sushi aficionados as uni.

If you’re familiar with the pricing at sushi restaurants, then you probably know that uni isn’t the cheapest item on the menu. It's a delicacy, and most commonly you'll find the salty orange slice sitting on a small bed of rice wrapped by a strip of seaweed. Good uni is delicious (as long as you enjoy fishy flavors), but unfortunately not as easy to come by as you might think.

For one, the gonads found inside purple sea urchins are smaller and less sought out in comparison to their red urchin counterpart, which are considered more commercially viable by fishers. But more importantly, the inhabitants of an urchin barren aren’t healthy: due to a lack of proper nutrients, the urchins are underfed, sick, and not good to eat.

According to The Bay Foundation, a non-profit working to reverse the urchin overpopulation, “These urchins are malnourished and miniature, often diseased, and of no value to the ecosystem nor fishermen. In contrast, urchins found living in kelp forests are healthier and have larger gonads (Uni), the edible part of the sea urchin common in sushi.” 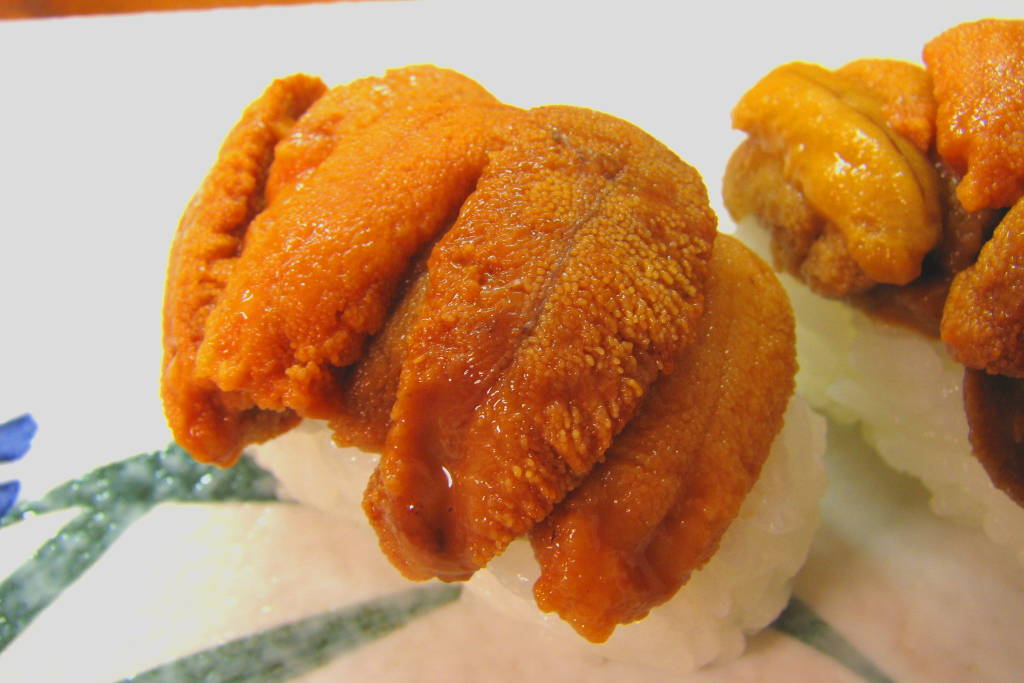 Sea urchin gonads, or uni, on a bed of rice.

Can We Help The Kelp?

Tom Ford, executive director at The Bay Foundation, has already started working to reverse the effects in the waters off the coast of Palos Verdes. His foundation works in areas that have transformed into urchin barrens in an attempt to bring back the kelp forests that once thrived just years earlier.

How? By smashing the malnourished urchins.

Tom Ford told KCET in an interview, “In the past, we used to pop the urchins off the rocks one at a time, collect them in bags, float them away, carry them out and dump them out into the ocean. In the end we decided the best thing to do was to smash them on the ocean floor. That way the little bit of food that’s in them was made available to the fish, those nutrients stayed in the ocean where they should be, and most importantly the calcium carbonate in their shell is now made available to the ocean at a time we’re concerned about ocean acidification.”

And so far, The Bay Foundation has been successful. Since beginning the restoration in 2014, Eric and his team have helped restore 45 acres of kelp forest in the Palos Verdes peninsula. Not only does the return of kelp offset rising ocean carbon levels, commercial fishers have also seen a huge return in their business. Tom also said:

“At a time when we have ongoing debate about whether or not it’s the environment or the economy, I think this is really solid demonstration that it’s good for both.”

Stay tuned for more kelp action—we’re working on our own campaign to protect and preserve kelp forests in Southern California called “Help The Kelp,” coming to you soon!